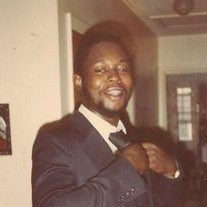 Statesboro, Ga., Mr. Willie James “Monk” Jackson, age 60 passed into rest Friday, September 27, 2013 at the East Georgia Regional Medical Center. The Bulloch County native was the son of the late Mr. and Mrs. James and Bertha Byrd Jackson. At an early age he became a member of the Simmons Branch Baptist Church. Willie James Jackson was educated in the public school system of Bulloch County and a graduate of the Statesboro High School class of 1971. He later continued his education at the North Georgia Technical and Vocational School where he received a degree in masonry in 1973. Mr. Jackson worked as a self employed brick mason until his health failed. He leaves fond memories to be cherished by his children, Jameackai Jackson, Rex, GA., Willie James Jackson, Jr., and Jamar Jackson both of Statesboro, GA., brothers, Ronald Jackson, Tallahassee, Fla. And Gallard Jackson San Diego, California, a host of aunts, uncles, other relatives and friends. A family hour to greet all friends and family will be held from 6:00 p.m. to 7:00 p.m. in the Ben Samuel Hill Memorial Chapel of Hill’s Mortuary, Inc. The funeral services for Mr. Jackson will be held 1:00 p.m. Saturday, October 5, 2013 at the Tabernacle Baptist Church (210 Bulloch Street) with the Rev. Gary Wallace, presiding and the Rev. Grayson Wallace as eulogist. Burial will follow in the Simmons Branch Baptist Church cemetery. Online condolences may be expressed at hillsmortuaryinc.com Final rites have been entrusted to Hill’s Mortuary, Inc

The family of Mr. Willie James Jackson Sr. created this Life Tributes page to make it easy to share your memories.