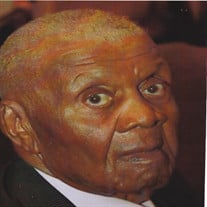 Statesboro, Georgia Deacon Solomon Wilbert Brock age 95 passed into rest, Saturday, March 26, 2016 at his residence. The Bulloch County native was the son of the late John and Maggie Johnson Brock and the husband of the late Ruby Dale Brock. He received his formal education in the public school system of Bulloch County and was a graduate of the Statesboro High and Industrial School. Upon graduating he enlisted in the United States Army and served in World War II. Deacon Brock studied Brick Masonry in Savannah, Georgia and later became owner of Brock’s Masonry and was also the owner of Brock’s Grocery Store and Restaurant and Brock’s Entertainment Business which served the community in the sixties. He was affiliated with the John Wesley Lodge #161 for 31 years and a faithful member of the Tabernacle Missionary Baptist Church where he served on the board of deacons and as the church treasurer. He leaves memories to be cherished by his memories, a son and daughter-in-law, Don (Marian) Brock, Augusta, GA., a daughter and son-in-law, Judy Brock Simon (Jimmy) Spivey, Statesboro, GA., 6 grandchildren, 3 great grandchildren, several nieces, nephews, a host of other relatives and friends. Family visitation will be held on Friday evening for 7:15 to 8:15 p.m. in the chapel of Hill’s Mortuary, Inc. Deacon Brock will lie in state on the day of service one hour until the funeral. There will be no viewing after the eulogy. Funeral services for Deacon Brock will be held 11 a.m. Saturday, April 2, 2016 at the Tabernacle Missionary Baptist Church with the Rev. Frankie Owens, Sr. presiding and the pastor, Rev. Daniel Woodson, officiating. Burial will follow in the Bulloch Memorial Gardens. Online condolences may be expressed at hillsmortuaryinc.com Final rites have been entrusted to Hill’s Mortuary, Inc.

Statesboro, Georgia Deacon Solomon Wilbert Brock age 95 passed into rest, Saturday, March 26, 2016 at his residence. The Bulloch County native was the son of the late John and Maggie Johnson Brock and the husband of the late Ruby Dale Brock.... View Obituary & Service Information

The family of Deacon Wilbert Brock created this Life Tributes page to make it easy to share your memories.

Send flowers to the Brock family.