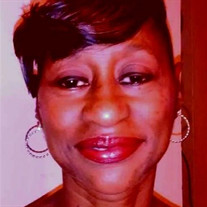 Statesboro, GA Ms. Vicki Brown age 55, passed into rest Tuesday, March 27, 2018 at the Augusta University Medical Center. The Bulloch County native was the daughter of the late Fred and Christine Williams Brown. She was a graduate of the Statesboro... View Obituary & Service Information

The family of Ms. Vicki Brown created this Life Tributes page to make it easy to share your memories.