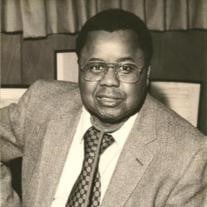 Statesboro, Georgia Dr. Thurman Clemons, M.D., age 76, went home to be with the Lord on Wednesday, March 28, 2012 at the East Georgia Regional Medical Center after an extended illness. The native of Cataula Georgia was educated in the public school system of Harris County. He was valedictorian of Spencer High School in Columbus GA. He was also a 1959 honor graduate of Tuskegee Institute with a Bachelors of Science majoring in Chemistry with a minor in Mathematics. Dr. Clemons served his country in the United States Army and continued his education by graduating from Meharry Medical College in 1966. Dr. Clemons was the second African American doctor to serve the residents of Bulloch and neighboring counties. Dr. Clemons started his medical career in Statesboro has the Medical Director of the Georgia Grace Nursing Home. He was the first African American physician to serve on staff at the Bulloch Memorial Hospital. Dr. Clemons was a member of the St. Mary’s Missionary Baptist Church where he served as a member of the Board of Trustees and on the board of Deacons. He served as the Medical Director of the Pecan Manor Nursing Home (now Westwood Nursing Center) from 1987-1991. Dr. Clemons traveled to Africa as a participant in a study on hypertension and African Americans. He also served as a delegate to the Medical Association of Georgia for the Ogeechee Medical Society, was a member of the American Medical Association, a lifetime member of the NAACP, a member of Alpha Phi Alpha Fraternity, a member of the Georgia Southern Foundation Board and a member of the Beta Chemical Society. Dr. Clemons gave unselfishly to his community by, giving free physicals to the Statesboro high school basketball players, he visited many homes in Bulloch County to provide medical assistance, financed on the job training for FBLA students hailing from different high schools in the county, he provided an opportunity for youth to attended Six Flags over Georgia and other special events, he served as a mentor and a role model for youth in the county. He was a nominee of the Dean Day Smith Service to Man Kind Award as well as many other prestigious awards and accolades. For many years he served as a “trailblazer” in the health field of Bulloch and nearby counties. He humbly served numerous patients with empathy, dedication, gratitude, and love until his retirement in 2009. He is preceded in death by a daughter, Tammy Clemons and a grandson, Thurman Clemons III. Dr. Clemons leaves behind to commemorate his life and legacy, his devoted and loving wife, Ammie M. Clemons, Statesboro, GA., children, Kimberly Clemons, Thurman Charles (Jamie) Clemons, and Dr. Amy D. Clemons, M.D., all of Statesboro, GA., three grandchildren, Camille and Jasmin Clemons both of Statesboro, GA., a sister, Mary Ann Clements, Detroit, Mich., three brothers, Robert (Helen) Clemons, Oxen Hill, MD., Eddie (Dorothy) Clemons, Nashville, TN., and Ray (Dorothy) Mobley, Newman, GA., a sister-in-law, Mary Gladys Clemons, Detroit, Mich., a host of other relatives, former colleagues and numerous friends. Dr. Clemons will lie in state at the church on the day of services one hour prior to the funeral services. There will be no viewing after the eulogy. The funeral services for Dr. Thurman Clemons, M.D., will be held 10:00 a.m. Saturday, March 31, 2012 at the St. Mary’s Missionary Baptist Church located 2227 Mallard Pond Road Statesboro, Ga., with the Pastor, Rev. Timotheus Mincey, officiating. Burial will follow in the church cemetery with military honors. Online tributes and condolences may be expressed at hillsmortuaryinc.com Final rites entrusted to Hill’s Mortuary, Inc.

Statesboro, Georgia Dr. Thurman Clemons, M.D., age 76, went home to be with the Lord on Wednesday, March 28, 2012 at the East Georgia Regional Medical Center after an extended illness. The native of Cataula Georgia was educated in the public... View Obituary & Service Information

The family of Dr. Thurman Clemons M.D. created this Life Tributes page to make it easy to share your memories.

Send flowers to the Clemons family.