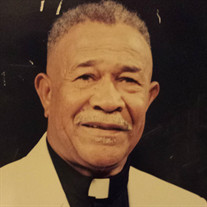 Superintendent Rufus James Williams, age 95, passed into eternal rest on Wednesday, December 31, 2014 at the Veteran&#8217;s Hospital in Augusta, GA. The Jenkins County native was a member of the Williams Grove Church of God In Christ. He later... View Obituary & Service Information

The family of Superintendent Rufus James Williams created this Life Tributes page to make it easy to share your memories.