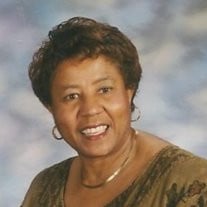 Statesboro, Ga. Ms. Shirley Lovett Lewis Ecclesiastes 3:1 “To everything there is a season, and a time to every purpose under the heaven” A Time to Be Born As he admired the beauty of his creation in Statesboro, Georgia, on December 30, 1942, God showed favor to the lives of the late Fred C. Lovett and his bride, Hazel M. Lovett when their daughter, Shirley Margaret Lovett Lewis was born. A Time to Build Up At an early age, Shirley gave her life to Christ at Banks Creek Primitive Baptist Church of Statesboro, Georgia. Later in life, she began worshipping at Cross Roads Community Church. She attended public schools in Statesboro, Georgia and graduated from Williams James High School, class of 1960. Because of her hard work and dedication in school, she received a College Entrance Scholarship, a Two-Year Tuition Scholarship and a Four-Year Scholarship for Private Voice Lessons at Tuskegee Institute. She completed her degree requirements and received a B.S. in Home Economics Education from Tuskegee Institute. She later attended Simmons College in Boston, MA and obtained her M.S. in Home Economics Education and a training certificate in Social Work. A Time to Love In 1984, Shirley met and married Herman Lewis, Sr. From this union, she gave birth to one daughter, Crystal V. Lewis and 2 step-children, Herman Lewis, Jr. (Marceda) of Midland, Georgia and Tavika Lewis of Smyrna, GA. Her life was devoted to being a great mother and compassionate educator. A Time to Plant Shirley began her career as a Home Economist at the Roxbury Federation of Neighborhood Centers in Roxbury, MA. After working as a service provider for nearly ten years in Massachusetts, she worked as an educator for 28 years in elementary, middle and high school. Life as an educator included Taft Middle School, Boston, MA; Jeffreys Secondary School in Ontario, Canada; Henderson High School, Chamblee, GA; Columbus High School, Columbus, GA; Julia P. Bryant Elementary School, Statesboro, GA; and William James Middle School, Statesboro, GA A Time to Reap The community was blessed with her hard work as President, Local Tuskegee Alumni Chapter, Boston, MA, Vice President of the Boston Home Economics Teachers Association, Officer of the New England Regional Alumni Chapter, Board Member of the Massachusetts Home Economics Association, Advisory Committee Member of the Women’s Service Club and Member of the American Home Economics Association. A Time to Lose At 3:30 a.m., God called his angel, Shirley Margaret Lovett Lewis, home into eternal rest on Saturday, August 17, 2013. A Time to Heal Those left to celebrate her spirit and cherish her memory are her mother, Hazel M. Lovett and daughter, Crystal V. Lewis of Statesboro, Georgia, a host of other relatives and friends. The Lewis family will receive friends on Wednesday evening from 6:00 p.m. to 8:00 p.m. in the Ben Samuel Hill Memorial Chapel of Hill's Mortuary, Inc. Services celebrating the life of Ms. Shirley Lovett Lewis will be held on Thursday morning at 11:00 a.m. at the CrossRoads Community Church located, 23923 US Highway 80 East Statesboro, GA 30461, with Pastor Carey Swanson officiating. Burial will follow in the Bulloch Memorial Gardens. Ms. Lewis will lie in state on the day of service from 10:00 a.m. until the funeral hour. There will be no viewing after the eulogy. Online condolences may be expressed at hillsmortuaryinc.com Final rites entrusted to Hill's Mortuary, Inc.

Statesboro, Ga. Ms. Shirley Lovett Lewis Ecclesiastes 3:1 &#8220;To everything there is a season, and a time to every purpose under the heaven&#8221; A Time to Be Born As he admired the beauty of his creation in Statesboro, Georgia, on December... View Obituary & Service Information

The family of Ms. Shirley Lovett Lewis created this Life Tributes page to make it easy to share your memories.

Send flowers to the Lewis family.