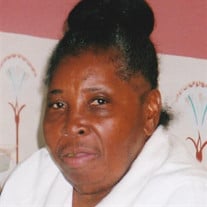 Mrs. Shirley Mae Bell was born in Statesboro, Georgia on July 23, 1941 to the late Mr. and Mrs. Willie Jack and Mae Bell Murray. She passed into eternal rest on August 24, 2017 at East Georgia Regional Medical Center, Statesboro, Ga. Mrs. Bell was employed by ITT/Grinnell for a numerous of years and retired as a Bus Driver from the Bulloch County Board of Education. She was a faithful member of Elm Street Church of God and served on the Usher Ministry. Mrs. Bell enjoyed several hobbies including fishing, singing and spending time with her loving grandchildren. She was a prominent giver of others and loved cooking and giving surprise dinners for her family.She was preceded in death by her father, Mr. Willie Jack Murray, her mother, Mrs. Mae Bell Whitfield Murray, her son, Mr. Mack Emory Bell Jr., and sister, Mrs. Carrie Lee Jackson. Ms. Shirley leaves to cherish her memories to her children, Mr. Norris Murray of Statesboro, Ga; Mr. Emory Lee Bell of Pelham, Ga and Mr. London Bell of Statesboro, Ga; one daughter, Ms. Tracy Bell of Statesboro, Ga. Her sisters, Mary Murray of Boston, Mass., Eloise (Willie) Childers, Barbara (Roy) Bradshaw, of Statesboro, Ga., brothers, Henry Murray of Portal, Ga and Willie Murray of Plainfield, NJ; four grandchildren and fourteen great-grandchildren; one aunt, Ms. Pauline Whitfield of Statesboro, Ga.; Ms. Naomi Bell, special daughter in law; Ms. Vivian Rogers, a special friend; a host of nephews, nieces, and other relatives and friends. family visitation will be held Friday evening from 7 p.m to 8 p.m.in the chapel of Hill's Mortuary, Inc. The remains will lie in state at the church one hour prior until the service. There will be no viewing after the eulogy. The funeral service for Ms. Bell will be held 11:00 a.m. Saturday, September 1, 2017 at the Elm Street Church of God with the pastor, Elder Alexander Smith, Jr., officiating. Burial will be in the St.Mary's Baptist Church cemetery.

The family of Mrs. Shirley Mae Bell created this Life Tributes page to make it easy to share your memories.

Send flowers to the Bell family.