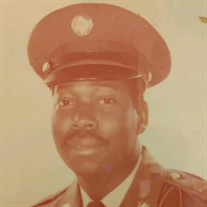 Statesboro, Georgia Mr. Robert Rich, age 76, passed into rest, Wednesday, May 4, 2022, at the East Georgia Regional Medical Center. The Bulloch County native was the son of the late Deacon Walter and Louise (Hendley) Rich. At an early age he became a member of the Harmony Baptist Church where he became a junior deacon. He received his formal education in the public school system of Bulloch County Georgia and was a graduate of the William James High School class of 1965. After graduation he relocated to Brooklyn, New York. In 1968 he was drafted into the United States Army. After being honorably discharged he returned to New York where he began employment with The Federal Reserve Bank in 1972, and he retired in 2008. Upon his retirement, Robert returned to Statesboro. In addition to his parents, he is preceded in death by his siblings, Deacon Herbert Rich, Etta Mae Rich-Parrish, Mary Lou Rich-Underwood, James Walter Rich and Sadie Mae Rich. Robert leaves to cherish his memories, sisters, Leomie Rich, Armetta Rich, Ruth Rich, all of Statesboro; Sisters-in-law, Emmie Lee Rich, Statesboro and Selma Rich, Florida, one special niece, Janet Underwood-Sutherland, Ohio; and s special niece and caregiver, Cynthia Elaine Rich -Wilson, Statesboro, GA; a host of nieces and nephews, other relatives and friends. A walk-through viewing for Mr. Rich, will be held, Friday, May 13, 2022, from hours of 4 p.m. to 7 p.m. at Hill’s Mortuary. The funeral service for Mr. Robert Rich, will be held, 11 a.m. Saturday, May 14, 2022, at the Harmony Baptist Church with the Rev. Troy Grubbs, officiating. Burial will follow in the church cemetery. Final rites have been entrusted to Hill’s Mortuary, Inc.

The family of Mr. Robert Rich created this Life Tributes page to make it easy to share your memories.

Send flowers to the Rich family.