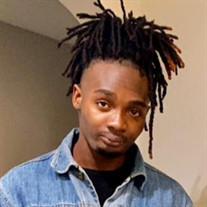 Statesboro, GA Robert &#8220;Keyjuan&#8221; Lawson age 21, passed into rest, March 30, 2020. He was a Bulloch County native and received his formal education in the Bulloch County school system. He was a member of the Statesboro High School... View Obituary & Service Information

The family of Mr. Robert Keyjuan Lawson created this Life Tributes page to make it easy to share your memories.

Send flowers to the Lawson family.