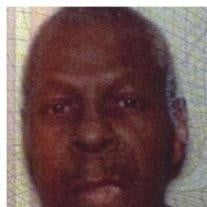 Mr. Raymond Antonio Evans, was born July 16, 1957 to the late Robert and Mable Muldrow Ford in Brooklyn, New York. He was the second of seven children. One sibling, Evyonne Evans proceeds him in death. As a child Raymond was very neat and... View Obituary & Service Information

The family of Mr. Raymond A. Evans created this Life Tributes page to make it easy to share your memories.

Send flowers to the Evans family.