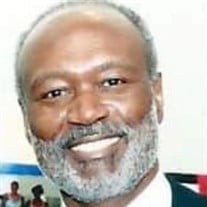 Deacon Quincy “Tony” Nunnally, Jr., 65, of Westborough, was called home to Glory suddenly on Sunday, June 10, 2018. Born March 29, 1953 in Statesboro, Georgia, he was the son of the late Quincy Nunnally, Sr., and Exilee (Jackson) Nunnally of Statesboro, GA. "Tony", as his hometown family and friends called him, was raised and educated in Georgia, cum laude graduate of Morris Brown College. He moved to Massachusetts in the mid-70s, residing in Marlboro before settling in Westborough over twenty years ago. Mr. Nunnally worked as a business analyst for Digital, Raytheon, Compaq, and Hewlett-Packard. He was recently employed as a Tax Specialist for H&R Block. He was a proud member and Deacon of the Greater Framingham Community Church. He became a defender of the Gospel, when he was ordained in March of 2003. He was later elected as Chair of the Deacon Board, where he proudly served with his whole heart and soul. He served as designated Treasurer for a number of years displaying his love and expertise of numbers. His passion for investing led him to become a member of the Church Investment Group, where he enjoyed sharing his knowledge of trading analytics. In 1991, he received the “Man of the Year Award” for his outstanding performance in supporting the South Middlesex Men’s Club. Quincy was humble, honest, and had a positive outlook on life. As a man of diverse interests he enjoyed many things such as cycling, fishing, and physical fitness. He was an avid comic book and sci-fi enthusiast, but of all his interests he took the most pride and enjoyment in being a husband, father, and grandfather. He truly loved his family! He was serious about his role as a husband and father, serving as a constant protector and provider. He wanted his children to know their heritage, and had become determined to discover his roots. It was important to him to connect and reconnect with family, and as President of the Nunnally Family Reunion Committee, he was successful in helping to plan, and saw to fruition, the first reunion in nearly 40 years, in June of 2017. Quincy was the beloved husband of his high-school sweetheart, Barbara (Burns) Nunnally; devoted father of Derek Antonio Burns Nunnally of Marlborough, Koury Wendell Nunnally and his wife Patricia of Leicester, Quincy Nunnally III of Westford and significant other Julie Lorden, and Danielle Tiara Nunnally of Chicago, IL; the son of, Exilee Nunnally of Statesboro, GA; loving brother of Patricia Davison of Stone Mountain, GA, Sherie McGee and her husband Michael of Byron, GA, Angela Nunnally of Statesboro, GA, the late Wendell, Robert and Todd Nunnally; proud grandfather of DeShaun, Kaidyn, Kyah, Derek Jr., Koury Jr., and Aeden Michael. He will be greatly missed by his nieces and nephews, whom lovingly called him “Uncle Ton Ton”: Katonya, Charlette, Briana and Jaime; and the beloved family cat, Tuxie Amber. He will remain a fondly remembered brother-in-law, in the hearts of Debra White and her husband Marvin White, the late Marilyn Green, and Elrico Rackard; an admired uncle to Rebecca Shontell, Chiquita and husband John, Latoya and husband Kelvin, Brittney, Willie Allen, Jalen, and Ricajanea, along with 14 great nieces and nephews, 8 great-great nieces, and 3 great-great nephews. Family visitation and viewing will be held on the day of service from 10:00 a.m until the hour of service. The funeral service for Mr. Nunnally will be held Saturday, 11 a.m. June 23, 2018 at the Thomas Grove Missionary Baptist Church, 500 East Olliff Street Statesboro, Georgia the Rev. Arthur Kelly, pastor, the Rev. J. Anthony Loyd, eulogist. Burial will follow in the Bulloch Memorial Gardens.

The family of Mr. Quincy Nunnally Jr. created this Life Tributes page to make it easy to share your memories.

Send flowers to the Nunnally family.