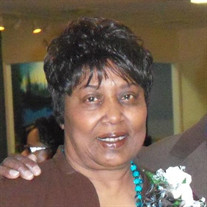 Statesboro, Georgia Mrs. Pearl Chatman, passed into rest, Wednesday, October 25, 2017 at the Syl-View Nursing Home under the care of Ogeechee Area Hospice. The native of Tallapoosa County, AL attended the Wall Street School in Tallassee, AL. At an early age, she united with Wall Street A.M.E Zion Church where she started teaching Sunday school at the age of 16. Following her graduation in 1955, she moved to Tuskegee, AL, leaving one year later for New York. During her early years in New York she attended Berkley Business School where she majored in business applications. While in New York she was employed at the Amsterdam News and with the New York Telephone Company. After graduating from Dale Carnegie Institute for Public Speaking she attended the Hunter College, New York City. As a result of her studies in writing and radio programming, she gained employment at WABC Radio as a research librarian. After moving to Statesboro in 1977, Pearlie attended Georgia Southern University and later graduated from Ogeechee Technical College in 2005. She was employed at East Georgia Regional Medical Center for many, many years where she served as a Food Service Supervisor. Mrs. Chatman was a long-time member of the Original First African Baptist church where she was one of the founding members of the Willing Workers Auxiliary, participated in with the Willing Worker’s Youth, a member of the senior choir and was involved in several civic and community organizations. Mrs. Chatman leaves to cherish he memories, her husband, Woodrow Chatman, Statesboro, GA, her children, Kenneth Chatman (Linda), Raleigh, NC., Yvonne Chatman-Robinson (Harris), Augusta, GA, Michael Chatman (Phillis), Statesboro, GA, Min. Renee Kitchens (Tony), Milledgeville, GA, sisters, Doris Coleman, Winston Salem, NC., Hazel Hooks and Ethel Townsend, Tallassee, AL, three grandchildren, seven great grandchildren, a host of nieces, nephews, other relatives and friends. Family visitation will be held on Friday evening from 6 p.m. to 8 p.m. in the chapel of Hill’s Mortuary, Inc. Mrs. Chatman will lie in state on the day of service one hour prior to the services. There will be no viewing after the eulogy. The funeral service for Mrs. Chatman will be held 1 p.m. Saturday, November 4, 2017 at the Original First African Baptist Church, 545 Westside Road Statesboro, GA. with the Rev. Bennie Brinson, presiding and the Rev. Frankie Owens, officiating. Burial will be in the Eastside Cemetery, Northside Drive East. Final rites have been entrusted to Hill’s Mortuary, Inc.

The family of Mrs. Pearl Chatman created this Life Tributes page to make it easy to share your memories.

Send flowers to the Chatman family.