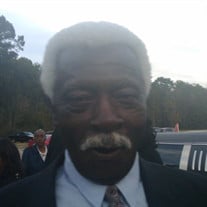 Statesboro, GA., Deacon Paul Walden, Sr., age 73, entered into rest, Tuesday, June 20, 2017 at the East Georgia Regional Medical Center. He was born in Rocky Ford Georgia to the late Ira and Jessie Melvin Walden. He received his formal education in the public school system of Screven County, Georgia. He was a self-employed construction worker and a member of the Bethel Primitive Baptist Church where he served on the board of deacons. He is survived by his wife, Bertha Lundy Walden, Statesboro, GA., three daughters, Barbara (Charles) Simon, Lynn Walden and Melinda Walden, all of Statesboro, GA., two sons, Paul Walden, Jr. and Dewayne Walden both of Statesboro, GA., a sister, Bernistine (Dr. James E.) Thomas, Millen, GA., a brother, Frank (Connie) Walden, Atlanta, GA., 15 grandchildren, 13 great grandchildren, a host of nieces nephews, other relatives and friends. The remains will lie in state one hour prior until the funeral services. There will be no viewing after the eulogy. The funeral services for Deacon Walden will be held 11 a.m. Wednesday June 28, 2017 at the Bethel Primitive Baptist Church with Elder Gary Wallace, officiating. Burial will be in the Dixon Branch Baptist Church cemetery. Final rites have been entrusted to Hill’s Mortuary, Inc.

The family of Deacon Paul Walden Sr. created this Life Tributes page to make it easy to share your memories.

Send flowers to the Walden family.