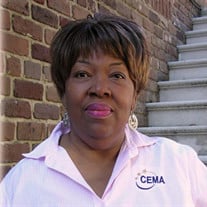 SAVANNAH, GA Mrs. Nellie Ann Hart, age 62, passed into eternal rest on Sunday, December 14, 2014 at the Memorial Health University Medical Center in Savannah, GA. She was a native of Candler County where she attended the public schools. She... View Obituary & Service Information

The family of Ms. Nellie Hart created this Life Tributes page to make it easy to share your memories.

Send flowers to the Hart family.