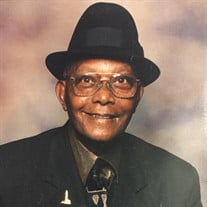 Statesboro, Ga. Mr. Moses C. Watkins, age 93, peacefully departed this life on May 10, 2017, at Ogeechee Area Hospice Inpatient Facility with his loving family at his side. He attended Rome Colored High School, and, at an early age, became a member of Greater Mount Calvary Baptist Church where he served faithfully as a deacon. He proudly served two years as a member of the United States Navy, he was employed by General Electric and Owens Hardware in Rome, Ga. where he was a truck driver for over twenty four years until he retired. In 1995, he and his wife moved to Statesboro, Georgia, and became active members of The Body of Christ Assembly, Inc. where he served faithfully as a Senior Deacon and Church Custodian. He attended and volunteered at the Senior Citizens Center in Statesboro, Ga until his health declined. He is preceded in death by his wife of sixty four years, Edna D. Watkins. Those left to cherish memories are his beloved children; Ms. Sharon Watkins, Rome, Ga., Mrs. Annette (J.R.) Holloway, Mrs. Edna (George) Lovett, Pastor Samuel C. (Diane) Watkins, all of Statesboro, Ga., Mr. Derrick (Donna) Watkins, Virginia Beach, Va., and Mrs. Ingrid Kathleen (Paul) Cantrell, Conyers, Ga.; 12 grandchildren, 13 great-grandchildren, three great-great grandchildren and many other relatives and friends. Mr. Watkins’ family will receive friends on Monday, May 15, 2017 during the noon-1 p.m. hour at the Body of Christ Assembly, Inc. Mr. Watkins will lie in state at the church during the noon-1 p.m. hour. There will be no viewing after the eulogy. Services reflecting the essence of Mr. Moses C. Watkins will be held Monday, May 15, 2017 at 1 p.m. at the Body of Christ Assembly, Inc., 2103 Brian Court, Statesboro, Ga. 30461, with Minister Derrick Solomon presiding and Pastor Samuel C. Watkins, Sr. as eulogist. Burial will follow in the Bulloch Memorial Gardens. In lieu of flowers, memorial contributions may be made to Serenity Springs PCH, Inc. 4838 Mill Creek Road Statesboro, GA. 30461 The repass will be held at the Body of Christ Assembly, Inc. in the Fellowship Hall. Online condolences may be expressed at hillsmortuaryinc.com. Final rites are entrusted to Hill’s Mortuary, Inc.

Statesboro, Ga. Mr. Moses C. Watkins, age 93, peacefully departed this life on May 10, 2017, at Ogeechee Area Hospice Inpatient Facility with his loving family at his side. He attended Rome Colored High School, and, at an early age, became... View Obituary & Service Information

The family of Deacon Moses C. Watkins created this Life Tributes page to make it easy to share your memories.

Send flowers to the Watkins family.