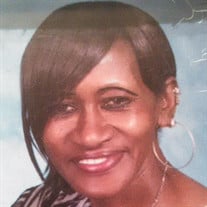 Rockyford, Georgia Mrs. Mercresia Cail age 55, passed into rest, Saturday, August 19, 2017 at her residence. The native of Screven County Georgia was the daughter of the late Mrs. Mariel Sampson and a member of the Dixon Branch Baptist Church.... View Obituary & Service Information

The family of Mrs. Mercresia Cail created this Life Tributes page to make it easy to share your memories.

Send flowers to the Cail family.