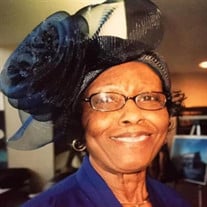 Statesboro, GA Mrs. Mary L. Sabb, age 91, went home to be with the Lord, Tuesday June 8, 2021, at the Ogeechee Area Hospice Inpatient Facility. She was born the youngest of seven children, in Bulloch County, Georgia to the late Pete and Cecilia Slater. Mary received her formal education in public school system of Bulloch County and attended the Polk Academy. She later attended Academy High School in Ft. Pierce, Florida, where she received her diploma. She believed in getting your education and she stressed its importance. Mary was married to the late James Walter Sabb for 63 years until his demise on September 4, 2016. The two lived in Cincinnati Ohio many years before returning to Statesboro, Georgia. Her work career consists of, working as an assembly operator at a toy factory, a cafeteria worker at a mental health facility before settling in at Avon Products, Inc. where she worked in several departments. Over the years she received many awards and recognition. She was a part of the efforts to unionize employees with the Rev. Jesse Jackson. She worked from 1967 and retired March 28, 1985. At an early age she accepted Christ at the St Mary’s Missionary Baptist Church, Statesboro Georgia. In compliance with the church’s covenant, when she relocated to Cincinnati in 1956, she immediately joined Lincoln Heights Baptist Church where she was a member until 2007. After returning home she united once again with the St. Mary’s Baptist Church. In addition to her parents, she is preceded in death by her husband of 63 years, James Walter Sabb; siblings, Johnny Slater, Mattie Moffett, Agnes Williams, Stephen “Bubba” Slater and Sarah Hilton. She leaves loving memories to cherish by: her daughter Shelia Sabb of Statesboro GA; a sister, Lossie Lee (Samuel), Fishkill, NY; grandsons, Jamie La-Vett Sabb, Michael Lee Richardson, Jr.; great grandchildren, Tildyn Mossyoak, Karma Leigh Sabb, Jamison Marcus Sabb and Malachi Tabias Cooley-Sabb; a god-daughter, Berlinda Arrington-Paul of Lawton; special friends of the family, Pearl Lewis, Charlie Fletcher, Michael Richardson, Sr. and Barbara Brandon; a host of nieces, nephews, cousins, church family and friends who loved her and will miss her dearly. A walk through visitation for Mrs. Sabb will be held, Thursday, June 17, 2021 from the hours of 1 p.m. until 7 p.m. at the chapel of Hill’s Mortuary, Inc. Mrs. Sabb will lie in state on the day of service from 12 noon until the funeral hour. There will be no viewing after the eulogy. A service honoring the life of Mrs. Mary Sabb will be held Friday, June 18, 2021 at the St. Mary’s Missionary Baptist Church 2227 Mallard Pond Road. Her hour will begin at 1 o'clock in the afternoon with the Bishop Lewis “Bobby” Hilton, officiating, the Rev. Timotheus Mincey, pastor. Burial will follow in the Bulloch Memorial Gardens. Due to the COVID-19 pandemic, social distancing and mask requirements will be enforced at the services. We ask that you adhere to all CDC guidelines.

Statesboro, GA Mrs. Mary L. Sabb, age 91, went home to be with the Lord, Tuesday June 8, 2021, at the Ogeechee Area Hospice Inpatient Facility. She was born the youngest of seven children, in Bulloch County, Georgia to the late Pete and Cecilia... View Obituary & Service Information

The family of Mrs. Mary Lou Sabb created this Life Tributes page to make it easy to share your memories.

Send flowers to the Sabb family.