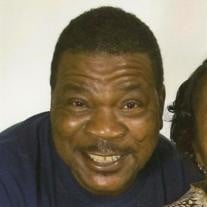 Portal, Georgia Mr. Leon Hagins, Sr. departed this earthly life, Sunday, August 5, 2012 at the Aventura Hospital, Aventura, Florida under the care of Vistas Hospice. He was a Bulloch County native and the son of the late Adock and Myrtice... View Obituary & Service Information

The family of Mr. Leon Hagins Sr. created this Life Tributes page to make it easy to share your memories.