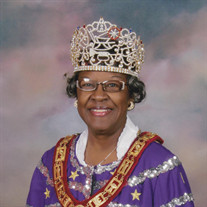 Augusta, Georgia Leola Mays Griffin was born on March 26, 1941 the daughter of the late Eloise Mays Cogle of Augusta Georgia and James Pugh of St. Augustine Florida. Sister Griffin grew up in Augusta and attended Richland County Public Schools for her early education and training. She is a graduate of Lucy Craft Laney High School. She received her degree in nursing from the University Hospital School of Practical Nursing. Leola Mays Griffin was joined in Holy Matrimony to the late Willie M. (Bill) Griffin in 1960 and they remain husband and wife until his passing October 14, 2000. Although no children came out of the union, she was a loving mother to many others. Sister Griffin truly shower many with unconditional love while imparting unto them wisdom and the ways of God. Leola Mays Griffin receive Christ at an early age, she became a member and was baptized at The Second Mount Moriah Baptist Church of Augusta Georgia. She served 50 plus faithfully years under the leadership of the former Pastors Rev. W.D. Morman, Rev. N.T. Young, Rev. F.D. Shaw, Rev Andy Thorton and presently the Rev. Jonathan Harris. Sister Griffin served as Secretary of the Trustee Ministry, President of the Gospel and Inspirational Choir. She served as a Member of the Healthcare Ministry, Mission in Action and Pastor's Aid Ministry. Locally she was a member of the New Savannah Senior Citizen Group, at Green Grove Baptist Church. She served as the assistance Manager of poll workers for the Augusta Georgia Board of Elections. On the state level, she served as a member of the General Missionary Baptist Convention of Georgia, Inc. 10th District. Leola Mays Griffin was a devoted and dedicated member of The Masonic Family, At the of her demise Sister Griffin was serving as the National Grand Most Ancient Matron for the National Grand Court of Heroines of Jericho, USA. She also served as the Grand Most Ancient Matron for the State of Georgia and Past Grand Court of Amaranth State of Georgia. (Locally) Sister Griffin was a member of Good Shepherd Chapter #62 O.E.S. District #16 and served as Associate Worthy Matron and Also other positions in the chapter. She also was serving as the Most Ancient Matron in Naomi Court. #305, H.O.J. A member of Cook Council of Crusaders, A member of Haynes Court #3 Court of Amaranth and Past Commandress of Arabia Court #2 Daughters On Thursday, March 3, 2016 in Augusta Georgia, God in His infinite wisdom sent His angel down to earth to receive the soul of His servant and assist her in making the transition from earth to Heaven where she now resides with her Maker and Creator. She was preceded in death by her parents Eloise Mays Cogle and James Pugh, her brother Benjamin Lonnie Mays Senior and her husband Willie M (Bill) Griffin. She leaves to cherish the memories Rev. Benjamin Lonnie (Vontresa) Mays Jr. of Atlanta, Ga. a Loving Sister Patricia Wright of Augusta, Ga. Robert (Bob) Jones Augusta, Ga. Nieces and Nephews, Ebony Mays Dorris of Atlantic City, NJ. Lisa Kirkland-Wright of Augusta Ga. Christopher Jason Wright of Augusta Ga. Great Nieces and Nephews, Aquarnesha Claud of Atlanta Ga. Donneque’ Kirkland, Ke’Ashia Kirkland, Donnell Kirkland Jr of Augusta, Ga. Crishayla Wright of Atlanta, Ga. Payton Ray-Clark of Augusta, Ga. Alvin Mark Dorris III, Lonnai Joh’nise Dorris of Atlantic City, NJ. Devoted Cousins Betty Hicks of Augusta Ga and Joy Jean North of Augusta Ga. and a host of very Close Friends. Mrs. Griffin will lie in state for viewing on Friday evening from 4 p.m. to 7 p.m. at the Second Mt. Moriah Baptist Church, 1404 Brown Street, Augusta, GA. 30901. H.O.J rites will be performed. Home Going Service for Mrs. Griffin will be held 11 a.m. Saturday, March 12, 2016 at the Beulah Grove Baptist Church, 1434 Poplar Street, Augusta, GA. 30901 with the Rev. Benjamin Mays, Jr. M.Th., Instate: 10 a.m. Burial will follow in the Walker Memorial Park Cemetery. Online condolences may be expressed at hillsmortuaryinc.com Final rites have been entrusted to Hill's Mortuary, Inc.

The family of Mrs. Leola Mays Griffin created this Life Tributes page to make it easy to share your memories.

Send flowers to the Griffin family.