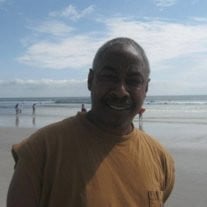 Springfield, OH. Kenneth Alan Peters, most notably known by his middle name, Alan, was born on March, 25th 1958, in Manhattan, New York to the late Eugene and Geraldine Peters. He grew up in Bronx, New York where he was immediately immersed into a culture that believed in and wholeheartedly upheld the importance of good family, good friends, good food, and good fun. Throughout his adolescence, Alan demonstrated promise of becoming a multi-faceted individual as he learned the value of hard work and strived to gain independence early on. When he wasn’t driving taxi-cab or supervising bridge construction, Alan didn’t hesitate to utilize his passion and skills on the chess board or pool table to help support himself and his family. In the early 1980’s, Alan relocated to Georgia and continued to build his family. Even through his health complications and personal storms in life, he depended on his anchor in Christ to help him persevere. Alan’s resourcefulness, good humor, and genuine love for the people in his life will forever live on in their hearts. Alan leaves to cherish his memory his three sons: Christopher A. Peters of Welch, WV, Quentin J. Peters of Jacksonville, FL, and Jeremy E. Peters of Savannah, GA, two grandchildren: Darrien M. Peters of Philadelphia, PA and Jer-mya N. Peters of Savannah, GA, one brother: James Kent (Alicia) of Concord, VA, one sister: Miriam Jones of Springfield, OH, five uncles: Earl Peters (Melody) of Hartford, CT, Julian Lewis of Bronx, NY, Andrew C. Lewis (Gloria) of Statesboro, GA, W. Roosevelt Lewis (Rose Faye) of Sylvania, GA, and Casper Lewis (Shirley) of Miami, FL, four aunts: Carolyn M. Rogers (David) of Springfield, MA, Marian Brown, Lula Lewis, and Margery Rogers all of Sylvania, GA, and a host of cousins, nieces, nephews, and friends. Services celebrating the life of Mr.Peters will be held 11:00 a.m. Tuesday, December 10, 2013 at our Ben Samuel Hill Memorial Chapel of Hill's Mortuary, Inc. with the Bishop Moses Lewis officiating. Burial will be in the William Chapel Church Cemetery. Mr. Peters will lie in state for viewing on the day of service from 10:00 a.m until the funeral services. There will be no viewing after the eulogy. Final rites entrusted to Hill's Mortuary, Inc.

Springfield, OH. Kenneth Alan Peters, most notably known by his middle name, Alan, was born on March, 25th 1958, in Manhattan, New York to the late Eugene and Geraldine Peters. He grew up in Bronx, New York where he was immediately immersed... View Obituary & Service Information

The family of Mr. Kenneth Alan Peters created this Life Tributes page to make it easy to share your memories.

Send flowers to the Peters family.