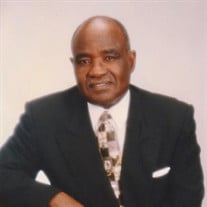 Statesboro, Georgia The Reverend Julius Abraham Jr, peacefully passed away at his home in Statesboro, Georgia on July 15, 2021, at the age of 92. The Reverend Abraham was a native of North Charleston, SC and born to the late Julius Abraham Sr. and Octavia (Hopkins) Abraham. Graduating as valedictorian of his high school class, he would later receive a B.S in Education from Allen University where he became a member of Alpha Phi Alpha Fraternity, Incorporated. He received a Master’s in Education from Columbia University in New York City. While pursuing his academic goals, he also took time to honorably serve his country in the United States Air Force. In 1957, he began his teaching career in Bulloch County by accepting a position at what was then William James High School, one of several schools in the totally segregated Bulloch County School System. By 1960, he had been promoted to Assistant Principal at William James and in 1963 became Principal of Willow Hill Elementary School. In 1971, Statesboro High School and William James High School were combined as a fully integrated school. Because of his proven leadership within the African American community, Reverend Abraham was called upon to be an Assistant Principal at Statesboro High School, the first fully integrated high school in Statesboro. In the ensuing years, Reverend Abraham would be an instrumental member of Statesboro High School’s leadership team and help direct the school and community through the many trials associated with school integration. In 1980, Reverend Abraham became the first African American Principal at Statesboro High School. Before retiring in 1991 to pursue his calling to ministry in the A.M.E Church, Reverend Abraham received numerous awards and recognition for his years of service in the Statesboro community. He was active member of Greater Bethel A.M.E Church and served as pastor of Jerusalem and Mount Pisgah A.M.E Churches. He served on numerous community boards and organizations – most notably the Boys and Girls Club of Bulloch County. In 2013, he received one of his greatest honors with the construction and dedication of the Reverend Julius Abraham Trail - a walking and biking path that winds through the very community in which he lived and labored. In his sun-setting years of life, he could most often be found doing what he enjoyed most – walking around various venues in Statesboro while communing with his Lord and Savior Jesus Christ. He is survived by his loving wife Arneese Woods Abraham, a sister, Ruth Murray, daughter Shery Abraham Littles (Vernon), son Julius Abraham III (Judy), grandchildren Vernard Littles, Erica Abraham, Alyssa Abraham, and Garrison Littles and a host of cousins, nieces, nephews, and other loved ones. A public walk-through service will be held on Friday, July 23, 2021 at the Statesboro High School Auditorium from 4 – 8 pm. Due to the COVID-19 health concerns, the family will have a private Celebration of Life Services, to be held 11:00 a.m. Saturday, July 24, 2021 at the Ben Samuel Hill Memorial Chapel of Hill’s Mortuary with the Rev Deborah Lanier Scott, presiding and the Rev. Benny Wilkey as eulogist. Interment will be held at 1:00 pm Sunday, July 25, 2021 at Carolina Funeral Home & Gardens in North Charleston, South Carolina. In lieu of flowers, those wishing to make donations may do so in memory of the Reverend Julius Abraham Jr. to the Boys and Girls Club of Bulloch County at https://bgcbulloch.org/. Services may be viewed via-live stream on our Facebook page at Hill's Mortuary, Inc. Final rites have been entrusted to Hill’s Mortuary, Inc.

The family of Reverend Julius Abraham Jr. created this Life Tributes page to make it easy to share your memories.

Send flowers to the Abraham family.