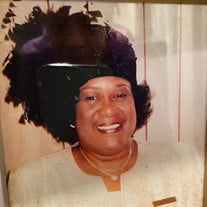 Brooklyn, New York Jearlene Patricia Hunter was born to the late Richard and Petronia Allen in Statesboro, Georgia on March 23, 1949, affectionately known as “Pat”. Pat attended the Public School System of Georgia and graduated from the William James High School on May 31, 1967. Pat joined and was baptized at Brannen United Methodist Church where she sang in the youth choir as a teenager. She later joined The Greater Free Gift Baptist Church, Inc. on Mother's Day, May 13, 1973, under the pastoral leadership of the late Reverend Dr. Daniel Webster Batts. Pat has been a member of the Cathedral of The Greater Free Gift Baptist Church, Inc. for the past 49 years. She served as the Assistant Church Secretary, and later as Church Secretary, to the late Reverend Dr. Daniel Webster Batts. Pat continued her administrative ministry by serving the Episcopal Office of Bishop William R. Whitaker II for the past 27 years, as well as the Trustee Ministry and Women’s Ministry for the past 23 years. Because of her genuine love for God and kingdom work and in addition to her obedience to her Pastor, she faithfully served as the Chairperson of the Pastoral Anniversary Committee for 25 years, including this year. Pat was not only a high octave soprano but served as President of the Young Adult Choir (later renamed as The Tabernacle Choir) for 21 years. Pat is a former member of the New York State Chapter of the Gospel Music Workshop of America, a member of the Board of Trustees and the recipient of The Black Women Who Rock award in 2016 under the leadership of Bishop Albert L. Jamison Sr., and a former member of the Voices of Inspiration under the direction of Reverend Ronnie Felder. Pat had a unique way of respectfully communicating and guiding people to excellence. She was so persuasive it was impossible to refuse her request. Her diligence helped foster lifelong relationships and she was trusted and respected by many leaders of the Clergy and other dignitaries. After graduation, she relocated to Brooklyn, New York, to pursue a career in business. She was employed as a Secretary for Dun & Bradstreet, Inc. for 25 years. For the next 21.5 years, she was employed at the New York State Department of Health/AIDS Institute as the Executive Administrative Assistant to the Medical Director, Dr. Bruce D. Agins, and retired from that position in June 2015. Pat's favorite past times included traveling, reading books and loving her family; but most of all, she adored being a mentor to many. Her greatest joy was being Mrs. James Hunter. Pat and James were role models for many -- showing the world what true love looks like. Pat departed this life on Sunday, February 6, 2022. She was preceded in death by her mother and father and one brother Ricky Allen. She leaves to celebrate her legacy: a loving husband of 26 years, James Hunter; four children: Kim Hunter (Brooklyn, NY), Diane Stewart (Dillon, SC), Mac (Michelle) Robinson (Waldorf, MD) and Jackie Hunter (Brooklyn, NY); four grandchildren: Tevon, Siliah, Andrey, Brennen; two great-grandchildren: Teyla and Tamir; two sisters: Gloria Lundy (Statesboro, GA) and Kimmonique Ingram-Adams (Upper Marlboro, MD); four brothers: Kenny (Shenita) Allen, Randy (LaTonya) Allen (Macon, GA), Charles (Debbie) Ingram and Warren Ingram (Arlington, VA); three sisters-in-law: Barbara Allen (Atlanta, GA), Mary Hunter (Washington, DC), and Louise (Ernest) Louis (South Carolina); four aunts: Lovis Jones and Cheryl Jones (Texas), Prethenia Jones (Orlando, FL) and Eloisa Allen (Bronx, NY); one uncle: Bratt Jones (St. Louis, MA); thirteen nieces, six nephews as well as great-nieces and nephews; a dedicated and devoted cousin Suzette Blount (Brooklyn, NY); a special son, Benny Loadholt; a best friend of forty years, Sheila Washington; four godchildren, and Dr. Bruce D. Agains, who was Pat’s former employer who held her hand with cognizant direction during this time; as well as a host of other relatives and friends. Last, but certainly, not least, Bishop William R. Whitaker II (“Peter”) who was not only her Pastor and Bishop, but for so many years cherished a special friendship and bond. Pat loved and adored “Peter” immensely and would stand in the gap at any time on his behalf. The funeral services for Jearlene Patricia Ingram-Hunter, will take place on Monday, February 14, 2022, at Greater Free Gift Baptist Church, 146 stockton Street, Brooklyn, NY 11206. Viewing is from 4-7 and the funeral service will follow. Burial will be held on Tuesday, February 15, 2022, at the Greenfield Cemetery, Hempstead, Long Island, NY at 11:00 am. Interboro Funeral Home 514 Evergreen Street Brooklyn, NY 11221 718-452-0101 This is a courtesy announcement made by Hill's Mortuary, Inc.

The family of Mrs. Jearlene Patricia Hunter created this Life Tributes page to make it easy to share your memories.

Jearlene Patricia Hunter was born to the...

Send flowers to the Hunter family.