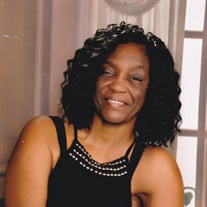 Statesboro, GA Ms. Janette Shaw age 62, passed into rest, Friday, August 31, 2018 at the Fairview Park Hospital, Dublin, Georgia. The Bulloch County native was the daughter of the late Johnnie and Louise “Tiny” Fields Hagins. At an early age she became a member of the Summerhill Baptist Church. Ms. Shaw was a graduate of the Statesboro High School class of 1975. She served her country in the United States Airforce and was retired as a Tele communication officer from Charleston Airforce Base South Carolina. In addition to her parents, she is preceded in death by her siblings, Johnny Roy Hagins, Henry Hagins and Johnnie Mae Robinson. She leaves to cherish her memories, her daughters, Khalilah Shaw, Austin, TX and Latisha Shaw (Terrell) Rainey, Rhome, TX, a granddaughter, Janae Rainey, Rhome, TX, two brothers, Louis A (Rosa) Hagins, Portal, GA and Fred Hagins, Statesboro, GA, a host of nieces, nephews, other relatives and friends. The funeral services for Ms. Shaw will be held 11 a.m. Friday, September 7, 2018 at the chapel of Hill’s Mortuary, Inc. with the Rev. Michael Moore, officiating. Burial will be held in the Georgia Veterans Cemetery, Glennville, GA. Final rites have been entrusted to Hill’s Mortuary, Inc.

The family of Ms. Janette Shaw created this Life Tributes page to make it easy to share your memories.

Send flowers to the Shaw family.