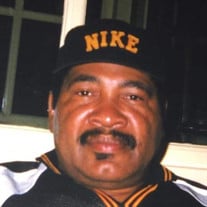 Hopewell, VA Mr. James Walter Wilson, passed into rest, Monday, June 5, 2017 at the Hopewell Nursing Center, Hopewell, VA. He was a Bulloch County native and the son of the late James and Lucille Wilson. Mr. Wilson received in formal education in the public school system of Bulloch County, Georgia and attended the William James High School.He enlisted in the United States Army in 1964 and later retired in 1970 after which he relocated to Richmond, VA., where he worked for the U.S.Government for twenty five years. He is preceded in death by his siblings, Adella Johnson, Johnny Daughtry and Bernard Wilson. He leaves to cherish his memories, his children, Sylvia Campbell and Perdthia Campbell both of Statesboro, GA., Mickey (Terri) Campbell, Harrisburg, PA., Brenda Thornton, Boston, Mass., and Keisha Wilson, Richmond, VA., 20 grandchildren, 36 great grandchildren, a host of other relatives and friends. Funeral arrangements are incomplete at this time.

The family of Mr. James Walter "JW" Wilson created this Life Tributes page to make it easy to share your memories.

Send flowers to the Wilson family.