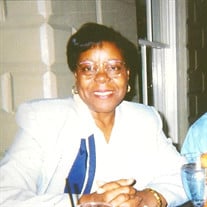 PORTAL, GA Mrs. Hattie Roberta Burke Thomas, age 75, passed into eternal rest on Thursday, May 1, 2014, at her residence under the care of Gentiva Hospice. The Bulloch County native was the daughter of the late Willie Burke and the late Lassie Robinson Burke. At an early age she became a member of the Rehovia Baptist Church. She received her early childhood education at the Willow Hill Elementary School, Portal, GA. She was a 1955 graduate of A. E. Beach High School, a graduate of Tuskegee University, Tuskegee, AL where she received a Bachelor of Science degree in 1959, and also a graduate of Nova University, Fort Lauderdale, FLA., where she received a Master’s of Science degree in 1974. Mrs. Thomas had a passion for teaching young children which led to her teaching career. She taught for one year (1959-1960) at the Willow Hill Elementary School, Portal, GA., before relocating with her husband in Florida where she worked in the Polk County and Broward County School System for over 35 years. During her time as a teacher in the Broward County School System she served as a Grade Chairperson, Faculty Chairperson, and Union Leader and was Teacher of the year. She later retired in 1996. While in Florida she and her husband were members of the Ascension Peace Presbyterian Church of Fort Lauderdale, FLA. She was a Deaconess at the St. Matthew Missionary Baptist Church, Metter, GA. She leaves her memories to be cherished by her devoted husband, Mr. James E. Thomas, Sr., Portal, GA; two sons, Mr. James E. (Cindy) Thomas, Jr., Portal, GA and Mr. Rodney T. (Gretchen) Thomas, Seattle, WA; sisters, Lassie Faye (Johnnie) Harden, Ft. Lauderdale, FL; Luverta Boyd, Philadelphia, PA. and Betty Jean (Billy) Morgan, Atlanta, GA; five grandchildren, Keely J. Thomas, Joseph E. Thomas and David Jeremiah Thomas all of Portal, GA; Amara W. Thomas and Brandon Thomas both of Seattle, WA; a host of nieces, nephews, other relatives and friends The family will receive friends on Thursday, May 8, 2014, from 6 -8 p.m. in the Ben Samuel Hill Memorial Chapel of Hill’s Mortuary, Inc. The funeral service for Mrs. Thomas will be held at 11:00 a.m. on Friday, May 9, 2014, in the Ben Samuel Hill Memorial Chapel with Rev. Darryl Scott officiating. Burial will follow at the St. Matthews Missionary Baptist Church Cemetery, Metter, GA. Following the burial, the family will receive friends and other family members at the Metter Train Depot, 303 East South Street, Metter, GA. Online condolences may be expressed at hillsmortuaryinc.com Final rites have been entrusted to Hill’s Mortuary, Inc.

PORTAL, GA Mrs. Hattie Roberta Burke Thomas, age 75, passed into eternal rest on Thursday, May 1, 2014, at her residence under the care of Gentiva Hospice. The Bulloch County native was the daughter of the late Willie Burke and the late Lassie... View Obituary & Service Information

The family of Mrs. Hattie Roberta Thomas created this Life Tributes page to make it easy to share your memories.

Send flowers to the Thomas family.