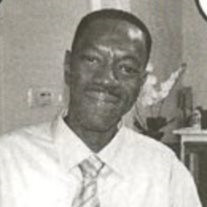 Mr. Harry Lee Jackson, III was born May 26, 1964 in Santa Anna, California to Mrs. Addie Odom and Harry L. Jackson, Jr. He was a graduate of the class of 1982 and at an early age he became a member of the Whitesville Baptist Church. Harry had... View Obituary & Service Information

The family of Mr. Harry Lee Jackson III created this Life Tributes page to make it easy to share your memories.