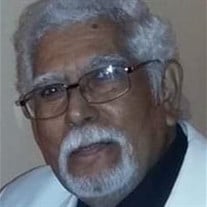 Guillermo Elton Young, Sr. (Bill) was born in Puerto Cortes, Spanish Honduras on December 16, 1935 to Elton Crispin Young and Elena Pove-Young. When he was a small child his father left home to work in the United States. When Bill was a teenager he went to live with his cousin Lloyd Hulse in British Honduras. It was at that time that Bill started to communicate with his father who was living in the United States. In 1954, when Guillermo was 19 years old he and his sister Carolina left Central America to go to the United States. They traveled to New Orleans then Harlem, NY where their father, Elton and his wife, Ms. Helen were living. He met Evon Marie Jones, fell in love and married her in 1958. Their union produced four children; Elton Crispin II, Gary Edward, Sandra Faye and Guillermo Jr. They lived in New York City before moving their family to their newly built home in Huntington, Long Island, NY in 1968. Bill was outspoken with a wonderful sense of humor. He loved his family and was known for the gatherings of family and friends at his home in Huntington. There was always delicious food, good music and lots of love. Bill loved all genres of music and passed on this love to his children. He loved sports, especially soccer and was an excellent player. Bill was highly intelligent, self-taught and a very hard worker and as a result was promoted to supervisor in many of his jobs. After losing the love of his life, Evon he retired to Statesboro, Georgia in 1999. Shortly after, Bill married Jewel Edwards of Statesboro. He was a devout Christian and in later years he rejoined the church serving to translate sermons from English to Spanish. He also participated in many charity and fund-raising events. He was a member of the bridge club because of his love of playing cards. After being diagnosed with stage 4 cancer, Bill relocated to Big Spring, Texas to live with his son Gary and his loving daughter-in-law Christine in January of 2019. Guillermo Elton Young Sr. lost his battle with cancer on Saturday March 23, 2019. Left to mourn are his wife, Jewel Edwards-Young, Statesboro, GA and his children Elton Crispin Young (Sandra), Gary Edward Young (Christine), Sandra Faye Young (partner Raymond Timmons), and Guillermo Young Jr. Left to cherish his memory are brother Edgardo Walter Young (sister in law Nancy Young), baby brother Jaime Young, brother-in-law Roy C. Davidson (sister in law Dolores Davidson), half-sister Gladys Flores, half-sister Ofelia Flores. Left to carry on his legacy are granddaughter Kristina Varenne Young, granddaughter Ashley Evon Young, granddaughter Brianna Renee Young, grandson Skyler Gary Ekwensi and grandson Liam William Young, also 9 great grandchildren and 3 step-grandchildren. Also, countless nieces and nephews, cousins in the US and Central America and as well as a host of friends new and old. Guillermo Sr. is preceded in death by his dear Evon, sister Teodosia Carolina Davidson, brother Marcos Tulio Young, sister in law Rev. Lucille Bradley, brother in law Charles W. Jones, brother in law Eugene Jones, brother in law Curtis Jones, sister in law Cora Lee Williams, sister in law Eloise Thomas, sister in law May Parrish, sister in law Robbie Faye Parrish, sister-in-law Aurora Gonzalez-Young, sister in law Nancy Lugo, half-brother Jorge Flores, nephews Daniel Young and Michael Young.

Guillermo Elton Young, Sr. (Bill) was born in Puerto Cortes, Spanish Honduras on December 16, 1935 to Elton Crispin Young and Elena Pove-Young. When he was a small child his father left home to work in the United States. When Bill was a teenager... View Obituary & Service Information

The family of Mr. Guillermo Elton Young Sr. created this Life Tributes page to make it easy to share your memories.

Send flowers to the Young family.