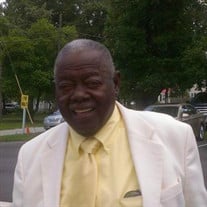 Statesboro, Ga Deacon George Jackson, Sr., age 79, passed into to rest, Monday, November 9, 2020 at the East Georgia Regional Medical Center. The Bulloch County native was the son of the late Joseph and Ella Pierce Jackson. He received his early childhood education in the public school system of Bulloch County, Georgia. He was a retired brick mason. Deacon Jackson and his brother Ernest Jackson, were the proud owners of Jackson Construction Company for over forty years. Deacon Jackson was a faithful and dedicated member of the Elm Street Church of God. He served on the board of deacons, served in the Sunday school Department, sang in the choir, serve on the jail ministry, was the moderator of “Youth Hour”, serve in the Brotherhood ministry and was instrumental in the expansion of the construction of the church. He was a member of the Brotherhood Community Fishing Auxiliary. In addition to his parents, Deacon Jackson was preceded in death by his two sons, Timothy Lee Jackson and James Ernest Jackson; his two sisters, Cindy Jackson and Odessa Grant; and four brothers, Amos Jackson, Roosevelt Jackson, Robert Jackson, and Joe Jackson. He leaves to cherish his memories: his wife of 59 years, Mrs. Rosa Belle Jackson; five children, Rachael Mikell of Atlanta, GA, George Willie (Germaine) Jackson, Jr. of Jonesboro, GA, Jacquelyn (Keith) Hamilton of Statesboro, GA, Andrae (Melissa) Jackson of Statesboro, GA, Jacobi (Brandie) Jackson of Statesboro, GA, a special nephew/son, Alvin (Freda) Jackson of Rex, GA; two daughters-in-law, Connie Jackson of Jonesboro, GA and Francis Jackson of Fayettville, NC; three brothers, Ernest (Phyllis) Jackson of Statesboro, GA, William Jackson of St. Petersburg, FL, and James (Shelia) Jackson of Jonesboro, GA; one sister, Ella Mae Jackson of Cummings, GA; eleven grandchildren; two great-grandchildren; a special mentee, Tyrone Cone, and a host of other relatives and friends in particular his pastors Alexander and Joyce Smith and his loving church family, Elm Street Church of God whom he loved dearly. A walk through viewing will be held on Friday afternoon, November 13, 2020 from 3 p.m. to 6 p.m. at Hill’s Mortuary, Inc. Due to the COVID-19 pandemic, a graveside service and burial will be held 10 a.m., November 14, 2020 at the Bulloch Memorial Gardens with the Rev. Dr. Alexander Smith, Jr., officiating. Services may be viewed via live stream at https://www.facebook.com/Hills-Mortuary-Inc Please be advised all CDC guidelines will be enforced at the viewing and graveside service. We ask that you adhere to all CDC guidelines. Final rites have been entrusted to Hill's Mortuary, Inc.

The family of Deacon George Jackson Sr. created this Life Tributes page to make it easy to share your memories.