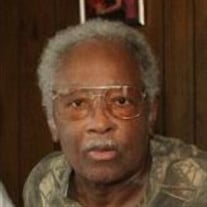 Rocky Ford, Georgia Mr. Fred Ruffin was born in Screven County, Ga on March 18, 1942 to the late Mr. Willie Hue Ruffin and Mrs. Luecinda Ruffin. On April 9, 2016 at the age of 74, Fred entered into eternal rest at the Ogeechee Area Hospice surrounded by his family. Fred graduated from Central High School in 1961. He was first employed at Youngblood Ford Company then went on to work at King Finishing for 35 years. He served on the Rocky Ford City Council for 16 years. He also worked at the Savannah River Challenge Place for Boys in the 1990s, the Williams Farm and Georgia Department of Transportation for many years. At an early age, Fred joined Parker Grove Missionary Baptist Church where he served faithfully on the usher board for many years. He loved sports and was a fan of the Atlanta Braves and Dallas Cowboys. In 1966, Fred was united in Holy Matrimony to Sherby Canty. To this union three beautiful children were born. Fred was preceded in death by his stepmother, Virginia Ruffin, two brothers, Leon Ruffin and Jimmy Ruffin, two sisters, Willie Mae Ruffin and Alma R. Simpson. He leaves to cherish his memories: his wife, Sherby Ruffin of Rocky Ford, Ga, one son, Wayne Ruffin, of Rocky Ford, Ga, two daughters, Delores Ann Ruffin (Phillip Johnson), and Yvonne Ruffin-Dunbar (Leron) all of Statesboro, Ga. four granddaughters: Tammy Robbins, Tiffany Robbins, Tynisha Robbins and Kiersten Dunbar; three grandsons: Eugene Robbins, Jordan McFadden and Christian Dunbar; three great grandchildren: Malachi Gaines and Miah and Maison Walker, a host of nieces, nephews, cousins, other relatives and friends. Viewing will be held on Friday evening from 3 p.m. until 6 p.m. at Parker Grove Baptist Church Family visitation will be held from 6 to 8 p.m. Funeral services for Mr. Ruffin will be held 1 p.m. Saturday, April 16, 2016 at the Horse Creek United Methodist Church, 5058 Rocky Ford Road, Rocky Ford, GA. 30455 with the Elder Levon Alston, Officiating. Burial will be in the church cemetery. Mr. Ruffin will lie in state on the day of services at noon until the funeral hour. There will be no viewing after the eulogy. Final rites have been entrusted to Hill’s Mortuary, Inc.

The family of Mr. Fred Ruffin created this Life Tributes page to make it easy to share your memories.

Send flowers to the Ruffin family.