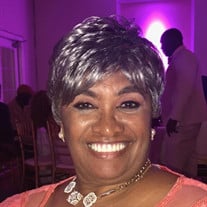 Brooklet, GA Frances (Lucille) Holloway Washington was born April 28, 1943, in Portal, Georgia. She slipped away in enteral rest on May 27, 2020, unexpectedly. She was reared in Portal, GA, and received her formal education through the Bulloch County School system. She was a proud graduate of the Class of ‘61 from William James High School. From there she set her sights on New Jersey where she married the love of her life of 51 years, Clifford Washington, Jr., who preceded her in death. After 28 years in New Jersey, they relocated their family back to Georgia to prepare for their retirement. My mom’s first love after God and her family was her work. She faithfully served as the manager of security at the Savannah Hilton Head Airport. After the tragic event of 911, she started working for the GS4 security at Georgia Pacific, where she worked loyally until she was called home. Lucille accepted Christ as her Savior at an early age. She moved her membership from Piney Grove Baptist Church in Bloomindale, GA, to the Johnson Grove Missionary Baptist Church, Statesboro, GA, where she served as a faithful member of the Pastor’s Aide committee. Lucille was preceded in death by her parents Jessie and Wilma Holloway; her sister Eulee Holloway Womack, and her brother Willie C. Holloway; and in addition, three brothers-in-law: Herbert Womack, Robert (Bob) Harrison, and Cleveland Williams; and one sister-in-law, Vanessa Holloway. She leaves to cherish her memory three devoted children: Denene F. Washington-Favors, C. Donnell Washington (Milagros) Washington, and Jermaine D. Washington, all of Brooklet, GA; along with Clifford Washington, III, of Athens, GA; two adopted children, Anna Lisa Winfrey-Washington of Athens, GA, and Eric (Theresa) Stephens; eight grandchildren, LaToya (Jermal) Washington-Chambers, Jonathan Washington, Jaren (fiancée Teonna) Washington, Jaren Stephens, Malkolm Stephens, Xavier Stephens; and her two heartbeats, Saa’e Zion Favors and Ayah Nia Simone Favors; and lastly, three great-grandchildren. She leaves three sisters Lillie (Ozell) Lawrence of Portal, GA; Yvonne (Jerry) Ellison of Fort Valley, GA; Charlene Harrison of Statesboro, GA; and Peggy R. Williams of Fort Lauderdale, FL.; and one brother, Jesse (Sarah) Holloway; one sister-in-law Rebecca Heyward and one brother-in-law Willie (Pat) Washington. In addition, three god-daughters, P. Simone (Kenyon) Smith of Middletown, NY; Tamika Harrigan of Morrow, GA; Michelle (Joseph) Roberts of Savannah, GA; and two god-sons, Alex (Aretha) Walker of Ashburn, VA; Mohammed (Carmen) Harrisuddin of Atlanta, GA. Along with a host of nieces, nephews, cousins, and other loving relatives and friends. Special recognition to her two friends, Betty Outlaw and Tracy Singleton. A public viewing for Mrs. Washington will be held Friday, June 5, 2020 from the hours of 2 p.m. to 7 p.m. in the chapel of Hill's Mortuary, Inc. The public will have an opportunity to express their condolences to the family with a walk through family visitation to be held from 5 p.m. to 7 p.m. (Friday). Please be advise that visitors will be allow to enter in groups of ten for visitation. A graveside funeral service and burial will be held 11 a.m. Saturday, June 6, 2020 Johnson Grove Missionary Baptist Church, 149 Johnson Grove Church Road Portal, GA 30450, with the pastor, Rev. S. Maurice Hill, officiating. Due to the COVID-19 pandemic, social distancing will be enforced at the funeral home and graveside services. We ask that you adhere to all CDC guidelines.

Brooklet, GA Frances (Lucille) Holloway Washington was born April 28, 1943, in Portal, Georgia. She slipped away in enteral rest on May 27, 2020, unexpectedly. She was reared in Portal, GA, and received her formal education through the Bulloch... View Obituary & Service Information

The family of Mrs. Frances Lucille Washington created this Life Tributes page to make it easy to share your memories.

Send flowers to the Washington family.