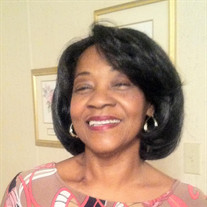 AIKEN, SC Ms. Fairy Bell Moody, age 65, passed into eternal rest on Wednesday, November 26, 2014 at her home in Aiken, SC. She was a member of Runs Missionary Baptist Church where she served faithfully in many auxiliaries which included the... View Obituary & Service Information

The family of Ms. Fairy Bell Moody created this Life Tributes page to make it easy to share your memories.

Send flowers to the Moody family.