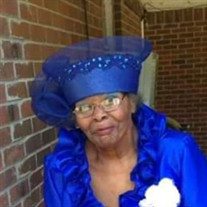 Statesboro, Georgia Mrs. Evelyn Washington Williams, age 76, passed into rest, Wednesday, July 4, 2018, at the Ogeechee Area Hospice Inpatient Facility. The Bulloch County native was the daughter of the late David and Willie Mae Adams Washington, Sr. She received her formal education in the public school system of Bulloch County and was a graduate of the William James High School class of 1961. At an early age she became a member of the Hodges Grove Baptist Church where she served faithfully until her health failed. Mrs. Williams served as the president of the Hodges Grove Christian Prayer Band and served in many other church organizations. Mrs. Williams was a former employee of ITT Grinnell where she was employed for fifth teen years. She was also a domestic worker for the late Charlie Robbins family. She is preceded in death by her husband, Bobby Williams; a daughter, Diane Williams; five brothers, Leroy, James, L.W., Tommy and Johnny Washington; sisters, Mattie Pearl Baldwin and Mary Lee Shipman. She is survived by her daughter, Barbara Jean Williams-Mills, Statesboro, GA, three grandchildren, Jacqui Williams and Bobby Mills both of Statesboro, GA and Jasmine Williams, Stone Mountain, GA, a sisters, Roberta Wallace, Statesboro, GA, two brothers, Deacon David (Leola) Washington and Clinton (Darlene) Washington, Sr. both of Statesboro, GA, a host of other relatives and friends. Mrs. Williams will lie in state on the day of service from 10 a.m. until the funeral hour. There will be no viewing after the eulogy. The funeral service for Mrs. Williams will be held 11 a.m. Saturday, July 7, 2018 at the Hodges Grove Baptist Church with the pastor, Dr. John Harmon, officiating. Burial will follow in the Bulloch Memorial Gardens.

The family of Mrs. Evelyn Williams created this Life Tributes page to make it easy to share your memories.