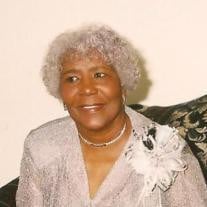 Statesboro, Georgia Mrs. Edna Diana Kellogg was born on November 10, 1927 in Rome, Georgia to the late Arthur Leroy Kellogg, and the late Beulah Mae Kellogg. She attended Rome Colored High School and at an early age, joined Thankful Baptist Church. On August 10, 1947, she was joined in Holy Matrimony to Moses Clark Watkins, and to this union, five children were born. After marrying Moses she joined Greater Mount Calvary Baptist Church where she served as an usher and sang in the choir. Throughout her years in Rome, Georgia she worked as an insurance agent for Guaranty Life Company and North Carolina Mutual. She also was employed at First National Bank in the Finance Department until her retirement. In 1995, she and her husband moved to Statesboro, Georgia and became active members of The Body of Christ Assembly, Inc. where she sang in the choir and served as a financial manager. She attended and volunteered at the Senior Citizens Center in Statesboro, Georgia until her health declined. She is preceded in death by her father Arthur Leroy Kellogg, and her mother Beulah Mae Kellogg. Mother Watkins peacefully departed this life on Tuesday, January 24, 2012 at the Ogeechee Area Hospice Inpatient Facility in Statesboro. She leaves to cherish precious memories her beloved husband of 64 years: Moses Clark Watkins; Statesboro, Ga., her children, Sharon Watkins of Rome, GA, Beulah Annette (J.R.) Holloway, Edna (George) Lovett, Samuel (Diane) Watkins (all of Statesboro), and Derrick (Donna) Watkins of Virginia Beach, VA, Ingrid Kathleen (Paul) Cantrell of Atlanta, GA; one brother Walter Kellogg of Rome, GA; twelve grandchildren; eleven great-grand children; one great-great grandchild, and many other relatives and friends. Family vistation will be held on Friday evening from 7:00 p.m to 8:00 p.m. in the Ben Samuel Hill Memorial Chapel of Hill's Mortuary, Inc. Services commemorating the life of Mother Edna D. Watkins will be held, 1:00 p.m. Saturday January 28, 2012 at the Body of Christ Assembly, Inc. 2103 Bryan Court, Statesboro, Ga. 30461, with Minister Derrick Solomon, Presiding and Pastor Samuel C. Watkins, pastor/eulogist. Burial will follow in the Bulloch Memorial Gardens. Mother Watkins will lie in states at the church on the day of services one hour prior to the services. There will be no viewing after the eulogy. Final rites entrusted to Hill's Mortuary, Inc.

The family of Mrs. Edna D. Watkins created this Life Tributes page to make it easy to share your memories.

Send flowers to the Watkins family.