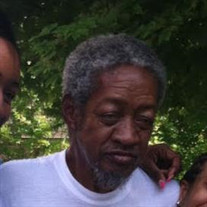 Union City, Georgia Mr. Eddie Wigfall passed into rest, Sunday, August 9, 2015 at his residence. He was the son of the late Catherine and Kenneth Wigfall and attended school in Bulloch County Georgia. Eddie was married to the late Jean Wigfall... View Obituary & Service Information

The family of Mr. Eddie Wigfall created this Life Tributes page to make it easy to share your memories.

Send flowers to the Wigfall family.