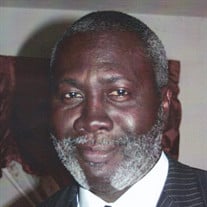 Statesboro, GA. The Reverend E. Charles Lee, 67, passed from this life to eternity on Thursday, November 10, 2016 from the Candler Hospital, Savannah, GA. Reverend Lee received his formal education in the Broward School System and graduated from Dillard Comprehensive High School. He also attended Charron Williams College of Business and Accounting, Ft. Lauderdale, Fla. He served his country in the U.S. Army and was employed with Florida Power & Light Company for over 35 years. Reverend Lee accepted Christ and united with Mt. Nebo Missionary Baptist Church, Ft. Lauderdale, FL, under the leadership of Elder Moses Monroe, Sr.; he was also licensed and ordained under his leadership. While serving at the Mt. Nebo Missionary Baptist Church, Reverend Lee served in many church capacities such as, an associate minister, preaching on many Sunday services and a Sunday School Teacher for the Young Adult Class. During his life span in Ft. Lauderdale, Florida, Rev. Lee also was a member of the Seaboard Baptist Association where he served as facilitator for the Congress of Christian Education and the Teenage Boys (T.A.B.S.) Counselor, Vice President of the Laymen Auxiliary and a Bible Expositor. He served his community as a P.T.A President of Castle Hill Elementary, City of Lauderhill Youth Basketball and Baseball Coach. Upon establishing Statesboro as home in 2008, Reverend Charles continued to work for his Master and became the pastor of Historical First African Baptist Church, Statesboro, Georgia where he served as the under shepherd for eight and one-half years. He was a member of the Pilgrim Missionary Baptist Association where he served as a Vice-Moderator in the Third District, he served as a Seminar Facilitator and Minister’s and Pastor’s Class Instructor under the leadership of Moderator Broomfield. He has served on the Planning and Zoning Board for the City of Statesboro; he was a member of the Concerned Clergy of Bulloch County and active in the NAACP. He leaves to cherish his legacy of love; his wife of 41 years, First Lady Elizabeth A. Lee, Statesboro, GA., four children, Kelvin (Nikki) Key, Kristopher Lee, Katrisa Lee and Kimberly Lee all of Ft. Lauderdale, Florida, four siblings, Zella (Pastor Dennis) Smith and Diane (Bishop Robert) Massey both of Oakland Park Fla., Harry Lee, Ft. Lauderdale, Fla. and Larry (Connie) Lee, Tamarac, Fla., his father-in-law, Edward Key, Statesboro, GA., and seven grandchildren, two great grandchildren, many nephews, nieces, cousins, the Historical First African Baptist Church family, other friends. A memorial celebration will be held Friday from 6 to 8 p.m., November 18, 2016 at the Historical First African Baptist Church, 1 Bobby Donaldson Ave. Statesboro, GA. Reverend Lee will lie in state on the day of service church one hour prior to the service. There will be no viewing after the eulogy. Home Going Celebration Service will be held 11 a.m. Saturday, November 19, 2016 at the Miller Grove Missionary Baptist Church 7829 GA Hwy. 24, Statesboro, GA 30461, with the Rev. Raphele Smith, presiding, Rev. Lester Johnson, III, officiating and the Rev. Harry J. Tremble, Jr. pastor. Burial will follow in the Bulloch Memorial Gardens. Online condolences may be expressed at hillsmortuaryinc.com Final rites have been entrusted to Hill’s Mortuary, Inc.

The family of Rev. E. Charles Lee created this Life Tributes page to make it easy to share your memories.

Send flowers to the Lee family.