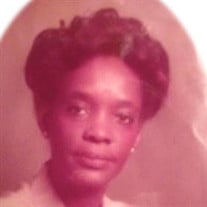 Ms. Doris Cooper was born January 28, 1939 in Washington, D.C. She was the daughter of the late Augustus and Minnie Cooper of Eastman, Georgia. She transitioned on Sunday, August 1, 2021 at her home in Statesboro, Georgia. Ms. Cooper was baptized at an early age in Georgetown (Washington, DC) and attended the Methodist church. Ms. Cooper’s educational journey took her from graduating high school to receiving a Master’s degree. She attended and graduated from John Adams High School in San Francisco, California. Furthering her education, she attended Vocational Nursing School of San Francisco and City College of San Francisco. Doris moved to Georgia in 1975 and enrolled at Georgia Southern College in Statesboro, Georgia, receiving the Bachelor of Science Degree in Sociology in 1994. Doris earned a Master of Arts Degree in Social Science in 2007. Ms. Cooper’s career was with the Bulloch County Health Department of Statesboro. She was an epidemiologist/nurse. After thirty plus years, she retired. Doris was a world traveler. She enjoyed visiting Spain, India, and the Fiji Islands. She was blessed to travel throughout the United States, including cruising to Alaska, and visiting family and friends. Doris’ pleasures included being a yoga teacher and a donor to the National Museum of African American History in Washington, DC. Ms. Cooper was the mother of three sons and one daughter. God blessed her with Reginald A. Cooper, Wayne Cooper, Doris LaWan Wesley and Roland Lucas. Ms. Cooper is preceded in death by her parents, Augustus and Minnie Cooper, her brother, Melvin Cooper, her son, Roland Lucas and her daughter-in-law, Ada Cooper. Ms. Cooper’s memories will be forever cherished by her sons: Reginald A. Cooper (Sharon) of Glennville, GA and Wayne Cooper of Statesboro, GA; daughter: Doris LaWan Wesley of Washington, DC; grandchildren whom she adored: Tony Wilbon, Johnny M. Wesley, Nakia Cooper, Racquel Wesley, Nkenge A. Coulton (Rohan), Sophia Caver (Leonard), Michael W. Cooper (Jaimee), and Quason Lucas; ten great-grandchildren; and other relatives and friends. A walk thru viewing for Ms. Cooper will be held Friday August 06, 2021 from 4p.m. to 7p.m at Hill’s Mortuary Inc. The funeral service for Ms. Cooper will be held at 11 a.m. on Saturday August 7th 2021, in the chapel of Hill’s Mortuary Inc. with the Bishop M.L. Jackson officiating/eulogist. Due to the COVID-19 pandemic, social- distancing will be enforced at the funeral home. We ask that you adhere to all CDC guidelines. Final rites have been entrusted to Hill’s Mortuary Inc.

Ms. Doris Cooper was born January 28, 1939 in Washington, D.C. She was the daughter of the late Augustus and Minnie Cooper of Eastman, Georgia. She transitioned on Sunday, August 1, 2021 at her home in Statesboro, Georgia. Ms. Cooper was baptized... View Obituary & Service Information

The family of Ms. Doris Cooper created this Life Tributes page to make it easy to share your memories.

Send flowers to the Cooper family.