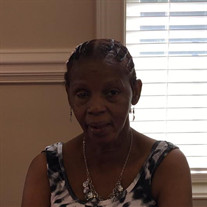 Statesboro, GA Mrs. Denise Smith age 59, passed into rest, Friday, March 2, 2018 at the Eagle Health and Rehabilitation Center under the care of Affinis Hospice. The native of Statesboro was educated in the public school system of Bulloch County... View Obituary & Service Information

The family of Ms. Denise Smith created this Life Tributes page to make it easy to share your memories.

Send flowers to the Smith family.