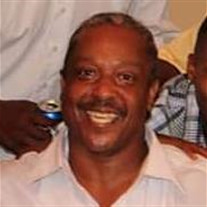 Statesboro, GA Mr. Curtis Perkins age 45, passed away on, Thursday, February 21, 2019 at his residence. He was born in Bulloch County and attended the schools of Germany and Statesboro, Georgia. He was employed by Rushing Heating & Air as... View Obituary & Service Information

The family of Mr. Curtis Perkins created this Life Tributes page to make it easy to share your memories.

Send flowers to the Perkins family.