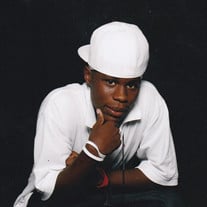 Statesboro, Georgia Mr. Christopher Washington age 23, passed on Friday, December 4, 2015 from injuries he sustained in an automobile accident. He is survived by his mother, Ruby Washington, Statesboro, GA. two sons, Kristopher Nunnally and Kristin Nunnally, both of Statesboro, GA., a brother, Henry Washington, Statesboro, GA., a sister, Tasha Tiggs, Little Rock, Ark, a host of other relatives and friends. Family visitation will be held on Friday evening from 7 to 8:30 p.m.In the chapel of Hill's Mortuary, Inc.. The funeral services for Mr. Washington will be held 11 a.m. Saturday, December 19, 2015 at the Agape Worship Center with the Rev. Frank Lott, eulogist, Elder Donald Chavers, Jr. pastor, officiating. Burial will be in the Eastside Cemetery. Mr. Washington will lie instate at the church on the day of service from 10 a.m. until the funeral hour. Final rites have been entrusted to the care of Hill's Mortuary, Inc.

The family of Mr. Christopher Washington created this Life Tributes page to make it easy to share your memories.

Send flowers to the Washington family.