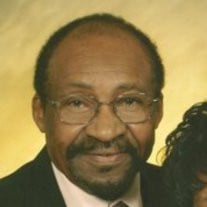 Statesboro, Georgia Mr. Charlie Lewis, Sr., age 86, passed into eternal rest, Sunday July 14, 2013, at his residence under the care of Gentiva Hospice and his loving family. Born in Sylvania, Georgia, to the late Mack and Rosa Reynolds Lewis, Mr. Lewis received his early childhood education in the public school system of Screven County. As a native and resident of Statesboro, Mr. Lewis was the proud owner of Lewis Van Lines, Bulloch County’s first African American Moving Company in which he opened in 1955 and Storage and Lewis Mart and Carousel Drive- in, which he began in the year of 1967. In later years, he owned Lewis Auto Used Cars, Lewis Health Food Storage, Lewis Public Self-Storage and Lewis rental apartments. He took pride in being in business for 56 years in the Statesboro Community. During this time, he employed many young men and women by giving them their first jobs and advising them to complete their education and to become an entrepreneur. He worked tirelessly in various community organizations. He served as one of the Founders and is a Life Member of the Bulloch County Branch of the National Association for the Advancement of Colored People (NAACP). He was the Chairperson of Public Affairs for the Chamber of Commerce, President of the Human Relations Council, a Representative of the Altamaha Area Community Action Authority, Inc., and was very instrumental in working with the Bulloch County Commissioners in starting the Food Stamp Program. He helped organized the Stabuc Club primarily to help boys and girls in receiving scholarships for college. In addition, he became very intrigued with "politics" and became an active member. in the Bulloch County Democratic Party. As a member he was the first Chairperson of the Political Action Committee and served as the Treasurer of the Party. He organized the "Meet The Candidate Forums”, worked on the "GET OUT TO VOTE DRIVES, and the Blue Ribbon Committee changing from the paper ballot to voting by electronic machines. He was a member of the "Eggs and Issues Breakfast Forums" where crucial issues of local and national politics were discussed. He was the recipient of the Bulloch County African American Heroes for his contribution and commitment to the citizens of this community by the American Legion Post 028 in July 2010. He was honored by the Bulloch County Democratic Party in receiving the Democratic Pioneer Award in July 2011. He was a lifelong member of Brannen Chapel United Methodist Church where he served in the following positions: Chairperson of the Administrative Board, Board of Trustees and Building Committee, President of the United Methodist Men. He also served on the Finance Committee. He was instrumental in the remodeling of the Old Brannen Chapel and building the new Sanctuary. In addition, served as member of Building and Grounds Committee of the Statesboro District of the UMC. He received numerous awards and recognition of services in the United Methodist Church. Mr.Lewis leaves a legacy of love to be cherished by, a devoted wife, Mrs. Alethia Lewis, Statesboro, GA., his loving children, Mrs. Le’Ontyne Buggs and Ms. Charlene Lewis, Clinton, Maryland, Ms. Reta Jo Lewis, Washington, D.C., Mrs. Wanda (Bernard) Hendrix, Marietta, GA., Ms. Sharma Lewis, Atlanta, GA. and Mr. Charlie Lewis Jr., Five sisters, one brother, several grandchildren, other relatives and friends. The Lewis family will receive friends on Thursday evening from 6:00 p.m. to 8:00 p.m. in the Ben Samuel Hill Memorial Chapel of Hill’s Mortuary, Inc. The funeral services for Mr. Lewis will be held 1:00 p.m. Friday, July 19, 2013 at the Brannen Chapel United Methodist Church, 20 Elm Street Statesboro, Ga., Rev. Thomas Norman III, pastor, the Bishop James E. Swanson Sr., eulogist. Burial will follow in the Bulloch Memorial Gardens. Mr. Lewis will lie in state at the church on the day of service from 12 noon until the funeral hour. There will be no viewing after the eulogy. Online condolences may be expressed at hillsmortuaryinc.com Final rites have been entrusted to Hill’s Mortuary, Inc.

The family of Mr. Charlie Lewis Sr. created this Life Tributes page to make it easy to share your memories.

Send flowers to the Lewis family.