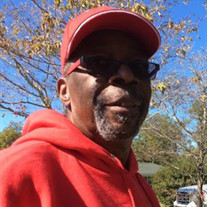 Alamo, GA The real measure of a Godly man is not his material worth but the lasting impact he has on the lives those around him. Charles Edward Woodard was such a man and there is no doubt that his servant heart is pleasing to God. Ask all... View Obituary & Service Information

The family of Mr. Charles Woodard created this Life Tributes page to make it easy to share your memories.

The real measure of a Godly man is not his material...

Send flowers to the Woodard family.