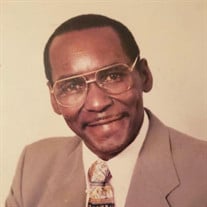 Statesboro, GA Mr. Charles Edward Best was born on February 17, 1945 in Bulloch County to the late Charlie and Mae Ethel Polk Best. He departed this life at his residence surrounded by his loving family on Thursday, November 14, 2019. Mr. Best graduated as Salutatorian from William James High School in 1963. After graduating from school he worked with his father as a Carpenter before entering into the United States Army at the rank of SP 5 from 1966 to 1968. While in the military he became a Master Chef and then went on to work as a Chef for the Holiday Inn in Smithfield, NC, Jesup, GA., and also Statesboro, GA. He also worked for the Fulton Federal Bank in Statesboro, GA. and was the Owner and Operator of Best Janitorial Service. Finally, he was employed at Georgia Southern University in Plant Operations where he retired after several years of service. He was a member of Harmony Baptist Church where he served on the Deacon Board and Finance Committee. He is preceded in death by a brother, Lawrence Best and a sister, Archie Mae Denson. He leaves to cherish an abundance of memories to his loving wife, Mrs. Lauretha Best, four children, Charles E. Best (Louverta) Hampton, VA, Aneshia Best Hill (Winslow) Statesboro, GA., Tangela Best, Atlanta, GA. and Jessica Farr, Tifton, GA. One sister, Sherbie Jean Adams, Savannah, eleven grandchildren, three great grandchildren, three nephews, a host of other relatives and friends. Mr. Best will lie in state at the church on the day of service from 11 a.m. until the funeral hour. There will be no viewing after the eulogy. The funeral service for Mr. Best will be held 12 Noon Tuesday, November 19, 2019 at the Original First African Baptist Church 545 Westside Road with the Rev. Troy Grubbs, Officiating. Burial will be in the Bulloch Memorial Gardens with military honors. Final rites have been entrusted to Hill's Mortuary, Inc.

Statesboro, GA Mr. Charles Edward Best was born on February 17, 1945 in Bulloch County to the late Charlie and Mae Ethel Polk Best. He departed this life at his residence surrounded by his loving family on Thursday, November 14, 2019. Mr.... View Obituary & Service Information

The family of Mr. Charles E. Best created this Life Tributes page to make it easy to share your memories.

Send flowers to the Best family.