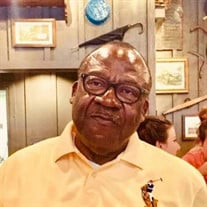 Statesboro, GA Mr. Bobby Martin passed from this earthly life, Monday September 21, 2020 at the age of 79 years old, at the East Georgia Regional Medical Center after a long-term illness. Bobby was the eighth child born to the late John Martin and Louise (Martin) Smith on January 10, 1941 in Statesboro, Georgia. The youngest of eight, he knew the true meaning of family and cherished his loved ones. He was known for his many acts of kindness and his constant willingness to assist and support his family and friends. Throughout his youth, he enjoyed fishing and sports. Both was his passion. Anyone who knew him knew he was always ready for a day in the fish pond and was forever a dedicated fan of the Dallas Cowboys. After graduating from William James High School in 1959, Bobby joined the United States Army in the year of 1961. While serving his country, he was stationed in Korea, Germany and other countries abroad. He dedicated three years of loyal service to his country. After serving in the military, he moved back to Statesboro in the year of 1962. Bobby married his high school sweetheart and the love of his life, Mary Holmes Martin, on October 31, 1962. To this union were four delightful children: Rose, Althea, Bobby Martini, and Arndrea. This devoted husband and loving father enjoyed spending time with and offering advice, often with his legendary humor to his son and daughters. Bobby began his work career with Bulloch Concrete later known as ARGOS Cement and Ready Mix Concrete Company as a Plant Manager. He found this career to be very fulfilling and rewarding. He retired after fifty two years of service. He leaves to celebrate his life and memory: his loving wife, Mary L. Martin, Statesboro, GA, his children: two sons, Bobby Martini Martin, Miami, FL and Michael Wilkerson, Statesboro, GA, three daughters, Rosita Martin, Althea Martin-Rice (Keyon) and Arndrea Louise Martin-Sapp all of Miami, Fl, six grandchildren, Jimtavis Walker Zarrion Prince, Darnisha Johnson, all of Miami, Fl, Aniyah Martin Atlanta, GA, Shaniya Wilkerson Statesboro, GA, a grandson which preceded him in death, Charles R. Sapp, seven great-great grandchildren: Presley Pope, Statesboro, GA, Jaslynn Walker and Jordyn Walker Atlanta, GA, Zarrion Prince Jr. and Charles Prince both of Atlanta, GA, Lyric Major and London Johnson, Miami, FL, special niece, Kristie Hendrix (Austin); a best friend, Hayward Fields (Jemena); a host of nieces, nephews, other relatives and loving friends. A walk through viewing will be held Friday evening, September 25, 2020 from 5 p.m. to 8 p.m. at Hill’s Mortuary, Inc. A graveside service and burial will be held 11 a.m. Saturday, September 26, 2020 at the Bulloch Memorial Gardens with the Rev. Frankie L. Owens, presiding and Elder Donald Chavers, Jr., officiating. Services may be viewed via live stream at our Hill's Mortuary, Inc. Facebook page. Due to the COVID-19 pandemic, social distancing will be enforced at the funeral home and graveside services. We ask that you adhere to all CDC guidelines. Final rites have been entrusted to Hill’s Mortuary, Inc.

The family of Mr. Bobby Martin created this Life Tributes page to make it easy to share your memories.

Send flowers to the Martin family.