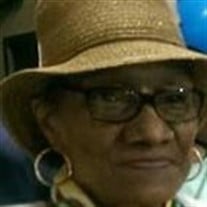 Mrs Betty Stone-Balkaransingh age 71, passed away on Friday, May 31, 2019 at her residence in Brooklyn, New York. The native of Millen, Georgia is the daughter of the late Junior Clark and the late Myrtis Simmons. She was also the stepdaughter of the late Phillip Simmons. Mrs. Betty Stone-Balkaransingh moved to New York as a child and graduated from high school at Central Commercial High School in New York City, New York. She then moved on and completed her college education at New York City Technical College. Upon completion of college she began working for the 83rd Police Precinct in Brooklyn, New York as a Police Administrative Aid until her retirement. She was known to all for being stern and she always had a no nonsense demeanor. and was always about business. She also had a very giving spirit and instilled an abundance of love to her family and to all that came in contact with her. She met her loving husband Mr.Andy Balkaransingh in the early 1980's and they were United in Marriage in 1987 in Brooklyn, New York. She leaves to cherish her memories, her husband, Andy Balkaransingh, children, Darrel Stone, Darren Stone, Donna Rosip, and Anthony Rocke who she called her son, brother, Nathanial (Dora) Clark, sister in law, Vanessa (Keith Mollineau)Juman, brother in laws, Andre Rocke and Andre Juman granddaughter Danielle Smith, great granddaughter, Desia Smith, grandson Daquan Robinson, godson Damark Thomas Jr, and a host of other relatives and friends. Viewing will be held on the day of service. There will be no viewing after the eulogy. The funeral service for Mrs Betty Stone- Balkaransingh will be held at 3 p.m. Saturday, June 15, 2019 at the Gordon Grove Baptist Church 4950 East Old Savannah Road, Millen, Ga with Pastor Robert Davis officiating. Interment will be at the Lans Family Cemetery in Millen, Ga. Final rites have been entrusted to Hill's Mortuary, Inc.

Mrs Betty Stone-Balkaransingh age 71, passed away on Friday, May 31, 2019 at her residence in Brooklyn, New York. The native of Millen, Georgia is the daughter of the late Junior Clark and the late Myrtis Simmons. She was also the stepdaughter... View Obituary & Service Information

The family of Mrs Betty Clark Stone Balkaransingh created this Life Tributes page to make it easy to share your memories.

Send flowers to the Balkaransingh family.