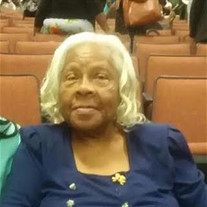 Statesboro, Georgia Mrs. Bernice Rivers, age 86, departed this life, Tuesday, September 25, 2018 at her residence. The native and lifelong resident of Statesboro, Georgia was the oldest of twelve children born to the late Lonnie and Winnie... View Obituary & Service Information

The family of Mrs. Bernice Rivers created this Life Tributes page to make it easy to share your memories.

Send flowers to the Rivers family.