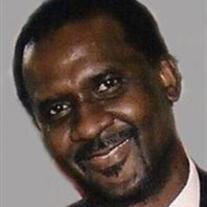 Born in Brandon, Mississippi on Thursday, August 6, 1953 to Willie and Bernice Grant, Arvin, affectionately known as Donnell, was soon uprooted and relocated to New Orleans, Louisiana. Arvin was a graduate of the class of 1972 from Carver High School. From there he began to work toward his professional goal of becoming an aviation mechanic. After enrolling and attending the International Training Center in Dallas Texas, he noticed that all of the trainers were extremely nervous and lost all of their hair from the stress of maintaining an aircraft, so he quickly changed his major to diesel machinery where he completed his training in Atlanta, Georgia and became a certified diesel mechanic. With these new credentials, Arvin worked through the years at Browning Ferris Industries, Louisiana Industries, and finally, LaFarge North America, Inc. Although working in a growing field proved to be promising, Arvin found time to enjoy his life. On June 13, 1977, he married the love of his life, Sharon (Keppard) Grant, and gave up his nickname, “Brother Rap.” From this union came three amazing children. Arvin is preceded in death by his father, Willie Grant, his Brother, Marcus Grant, and his grandson, Memphis Christian Grant. On May 23, 2012 Arvin d. Grant Sr., departed this earthly life at his residence in Snellville, Georgia under the care of Embrassing Hospice. He leaves memories of him to be cherished by his wife, Sharon Grant of Snellville, Georgia; his children, Calvin Mikell of Snellville, Georgia, Arvin (Tamara) GrantJr. of Lawrenceville, Georgia and Shantelle (Andre) Hill of Columbus, Ohio; beloved grandchildren, Tayron and Ciairra Mikell of Tucker, Georgia and Sterling and Blake Grant of Lawrenceville, Georgia; his mother, Bernice A. Grant of New Orleans, Louisiana; his siblings, Willa Preston of Hammond, Louisiana, Albert (Sharon) Grant of Chicago, Illinois, Bobbie Mercadel of Canton, Mississippi, Jerry (Edward) Richard of New Orleans, Louisiana, Wanda (Connie) Milton of Tyler, Texas, and Stanley Grant of Brandon, Mississippi; a host of nephews, nieces, other family members, and friends. Celebration of Life Services for Mr. Arvin Grant Sr. will be held 2:00 p.m. Saturday , May 26, 2012 at the Fannin Missionary Baptist Church, 2757 Hwy 471 Brandon, Mississippi with the Rev. Billy Fenderson, pastor, presiding and the Rev. Kenneth Adams, as eulogist. Burial will follow in the church cemetery. Final rites entrusted to Hill's Mortuary, Inc. Remains will be forwarded to Dean Memorial Funeral Home 745 Hwy 4468 Brandon, Mississippi. 39042 Telephone number (601) 825-3884

Born in Brandon, Mississippi on Thursday, August 6, 1953 to Willie and Bernice Grant, Arvin, affectionately known as Donnell, was soon uprooted and relocated to New Orleans, Louisiana. Arvin was a graduate of the class of 1972 from Carver High... View Obituary & Service Information

The family of Mr. Arvin D. Grant Sr. created this Life Tributes page to make it easy to share your memories.

Send flowers to the Grant family.