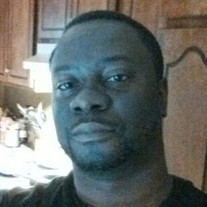 Statesboro, Georgia Mr. Alex Jason Brown, age 47, passed into rest, Wednesday, January 19, 2022, at his residence. The native of Statesboro was born and reared in Lakehurst, New Jersey where, he received his formal education. Mr. Brown resided in Lyons, Georgia for several years with his mother, the late Jeanette Palmer Brown until he later moved to the Statesboro area where, he resided for the past twenty-one years. He was currently employed with the Tattnall County Board of Education as a I.T. Specialist. Mr. Brown is preceded in death by his son, Caleb D. Brown and his mother, Jeanette Palmer Brown. He is survived by his father, Jerry e. Brown, Lakehurst, NJ, two brothers, Andre (Tammie) Brown, Harvest, AL and Anthony Brown, Richmond, CA; several nephews, nieces, other relatives and friends. Final rites have been entrusted to Hill's Mortuary, Inc.

The family of Mr. Alex Jason Brown created this Life Tributes page to make it easy to share your memories.